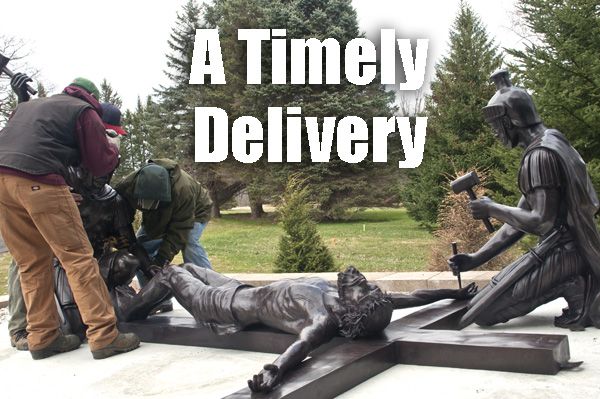 What perfect timing for Good Friday and Easter Sunday!

Early in the morning on April 5, a large 18-wheel truck ascended Eden Hill in Stockbridge, Mass., to deliver four large crates — the bronze statues for 10th and 11th stations of the life-size Stations of the Cross being installed on the hill facing the National Shrine of The Divine Mercy.

By two in the afternoon, workmen had positioned both stations on their permanent platforms, ready for Good Friday pilgrims to view. They are a most dramatic depiction. The face of Jesus as He is nailed to the Cross is a chilling reminder of that first Good Friday when He died for our sins.

The Stations of the Cross are the work of famed sculptor Timothy Schmalz and were made possible by a gift from a generous Marian Helper. The 12th Station is expected to be delivered later this Spring, and the final two will be delivered and installed in the Summer.

A dedication of the life-sized Stations will be held in September.