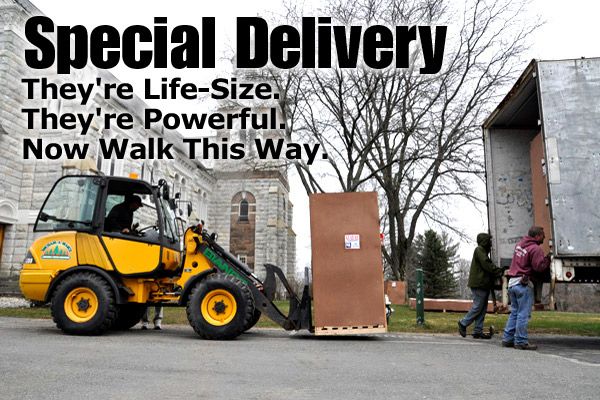 This is the sort of exchange you don't often hear:
"I think this one is Pontius Pilate."
"Alright, let's put him over here."
"This is a Roman soldier. Where do you want it?"

A life-size rendering of the Roman governor stood pallet to pallet with those of a pained Jesus Christ, angry Roman soldiers, and a heartbroken Mary. Yes, this was an historic gathering for sure. Thanks to a generous benefactor, the Marian Fathers of the Immaculate Conception are constructing a Stations of the Cross on the grounds of Eden Hill. The first four stations were delivered on a rainy April 19 — fittingly during Holy Week.

"This is an amazing day," said Tom Welch, the donor who has funded the project. Tom, along with Marian Fathers, their staff, and a construction crew marveled at the sculptures as they were unloaded from an 18-wheeler and unwrapped after a long journey from the bronzing foundry.

"If a picture is worth a thousand words, a sculpture is worth 3,000 words," said Tony Frey, the business partner of the figurative artist Timothy P. Schmalz of Canada. This was the first time Mr. Frey had viewed the statues, having only seen their rendering during the development of the sketches.

The sketches, portraying the facial expressions, bodily contours, and positioning of the figures for each Station, were developed through the efforts of the donor, his wife, and his granddaughter, Lauren Miller, along with critiques and suggestions from Fr. Kaz Chwalek, MIC, Fr. Richard Drabik, MIC, and Ellen Miller, a member of the Marian Fathers' staff.

The first four Stations will be installed later in May. The Marians expect the remaining 10 Stations to be installed in time for Divine Mercy Sunday 2012.

The donor and his wife Charlene are funding and overseeing the project out of a desire to honor the suffering and death of Christ, The Divine Mercy, on the grounds from which His message has spread throughout the world.

"I really believe this will do a lot of spiritual good," said Mr. Welch, wearing a hard hat and carrying a clipboard. "It's going to attract a lot of people to the Shrine, and it will have an impact on their understanding of what Jesus went through for our redemption."

By the time the Stations are completed, Mr. Schmalz, a classically trained artist renowned for his epic Christian artwork, will have produced more than 50 life-size bronze sculptures — vivid, powerful sculptures not only of Christ but of His followers and tormentors in the last hours of His life, leading to His crucifixion and burial.

Timothy describes his sculptures "as being visual prayers." His mission, he said, is "creating art that has the power to convert."

That's the hope of the Marians, too, who for years have dreamed of one day building an outdoor Stations of the Cross, or Way of the Cross, to enhance the experience for the thousands of pilgrims who come to Eden Hill each year seeking spiritual renewal through the redemptive message of The Divine Mercy.

The Divine Mercy message itself, as revealed through Sacred Scripture and the private revelations of the 20th century mystic St. Maria Faustina Kowalska (1905-1938), centers on the Paschal mystery of Christ's Passion, death, and Resurrection. Saint Faustina, honored in the Shrine with a special side chapel that contains her relic, was called by Christ to share in His Passion, to unite her suffering to that of Christ on the cross.

Pilgrims will be encouraged when making the Stations to pray St. Faustina's Way of the Cross, which is based on her Diary and is prayed at the Shrine during Lent. Fittingly, the series of Stations will begin and end near the entrance of the Shrine, where pilgrims receive Christ's mercy though the Sacraments of the Eucharist and Reconciliation and The Divine Mercy devotions at 3 p.m.

In Church tradition, meditating on the Paschal mystery through the Stations of the Cross has served as a means by which we can surrender ourselves more deeply to our merciful Lord, who accepted the cross for the salvation of mankind.

Through St. Faustina, Christ tells us, "You please Me most when you meditate on My Sorrowful Passion" (Diary of St. Faustina, 1512).

"The cross of Christ is where our own transformation begins," said Father Kazimierz "Kaz" Chwalek, MIC, the director of Evangelization and Development for the Marians. "As St. Paul writes, 'For if we have grown into union with Him through a death like His, we shall also be united to Him in the resurrection'" (Rom 6:5).

A gentle, sloping path is being constructed around Eden Hill's highest point, the glade overlooking the front of the Shrine. Along the path will be the 14 Stations. The path will accommodate wheelchairs and scooters. According to detailed engineering plans, each Station will be a place of rest, reflection, peaceful contemplation, and prayer.

"It's like this hill was waiting for this," said Mr. Frey as the crates were unloaded. "As far as the art is concerned, this is a dream environment — sky and trees. It's just going to be fantastic."

Mr. and Mrs. Welch were inspired to initiate the project by outdoor Stations they've seen during pilgrimages to some of the world's most famous shrines.

"I was impressed specifically with the life-size Stations in Lourdes [France] and at St. Anne de Beaupré [in Canada]," the donor said. "When my wife and I came out to Stockbridge and were given a tour of the grounds, I thought it would be a very nice setting for life-size Stations of the Cross, to proclaim the whole restoration of mankind through Christ's salvific graces."

Fr. Kaz had a video camera in hand to capture the unwrapping of the Stations. First to be unveiled were the Bronze crosses. Next was a Roman soldier wielding a whip.

Unpacked and in a disjointed array beside the Shrine's bell tower, the figures were a three-dimensional equivalent of a word scramble, or rather a "stations identifications" — this one goes with those ... that one goes with this — until order held sway and the tragic, powerful scenes of the Passion unfolded:

1. Jesus is condemned to death;
2. Jesus is given His cross;
3. Jesus falls the first time; and
4. Jesus meets His Mother.

Meanwhile, back in his studio, the sculptor Timothy Schmalz is imagining Jesus being laid in the tomb — the end of the project, but certainly not the end of the story of our salvation.

"Here's another Roman soldier," one of the workers shouted. "Where do you want it?"

"Right about here," the donor said.