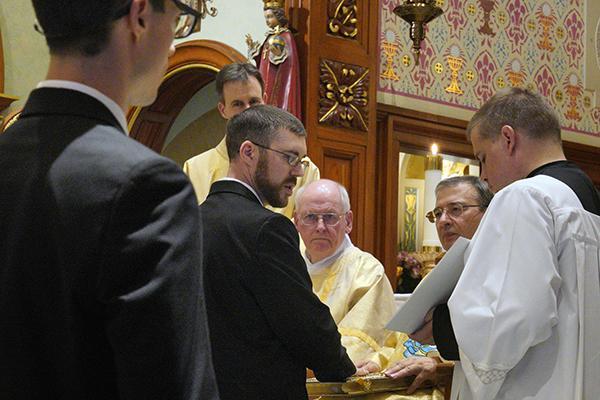 Aug. 15, 2019, Stockbridge, Massachusetts — How has God been blessing the Marian Fathers? Let's count the ways.

1. Five men professed their first vows as members of the Marian Fathers today at the National Shrine of The Divine Mercy.

2. Another 13 men in Marian religious formation renewed their vows.

3. Last evening and today a total of six men entered the community, either as novices or postulants.

6. The Marian Fathers continue to have more than 30 men in formation — more than most dioceses in the country.

Father Donald Calloway, MIC, the Marians' vocations director, gives credit for the growth in the Congregation to the Divine Mercy and Our Lady. But, he added, the Marians' shared brotherhood has been a huge draw for men who seek to serve God.

"When guys come and visit us, they really get a sense that we're men of the Church, and we want to give everything for people to get to Heaven," he said. "And the guys love that!"

Call Them 'Brothers'
The latest reason for celebration occurred today.

Watch a video from the day:

Provincial Superior the Very Rev. Fr. Kazimierz Chwalek, MIC, accepted and confirmed their one-year vows on behalf of the Marian Fathers and the Church on the Solemnity of the Assumption of the Blessed Mother into Heaven.

One by one and by name, the men stepped forward to recite the moving words of profession:

I, (name), for the glory of God and the honor  of the Most Blessed Virgin Mary and all the  Saints, in the presence of the entire Community,  through your hands, most Reverend Father, vow  to Almighty God in the Congregation of Marian Fathers of the Immaculate Conception of the Most Blessed Virgin Mary, according to its Constitutions,  the three vows of chastity, poverty, and obedience  for one year. So help me God and this holy Gospel.

With the vows, they became Br. Benancio, Br. Nicholas, Br. Stephen, Br. Stephen, and Fr. Fidele, with the suffix "MIC" indicating their membership in the community.

Following the profession, Fr. Kaz proclaimed, "I earnestly commend you to God Almighty and to Mary Immaculate, our Mother and Patroness, that you may be able to joyfully and faithfully carry out your vows, unite with God, [and] attain holiness and eternal life."

Father Kaz then presented the new brothers with the Blue Scapular of Our Lady, which serves as a sign of honoring and imitating Mary, an invitation for the wearer "to give Christ ... your undivided service in the Church."

The three new brothers then processed to the sacristy where, for the first time, they donned ecclesiastic garments. The change of clothing — from the white shirts and black pants of novices to black clerical garb — symbolizes the putting away of the old life and the taking up of the new. Father Kaz prayed that God "remove from your heart the vanity of this world, which you renounced at your Baptism. May the Lord vest you in 'the new man,' who was created according to God in justice and true holiness."

The men then received an extended round of applause from those assembled, including the many Marian priests from around the world who came to celebrate and concelebrate the Mass.

For Christ and the Church
Following the Mass, the five men said they share a love for Mary Immaculate, a zeal to spread the message of Divine Mercy, and a yearning to do God's will.

"I feel awesome, blessed, excited, happy," said Br. Ben, from Los Angeles, who felt called to join the Marian Fathers during a year spent as a Marian Missionary of Divine Mercy, a ministry headed by Fr. Michael Gaitley, MIC, in nearby Lee, Massachusetts.

Brother Ben hopes to someday be a priest — one that "loves our Lord very much and that becomes evermore transformed into the image of His Son."

"The overwhelming feeling I have is gratitude," said Br. Stephen Castellano, MIC, from Washington. "I feel gratitude and expectant receptivity for whatever God wants to do with me and through me."

Brother Stephen Murphy, MIC, who grew up in West Virginia, also served for a year with the Marian Missionaries of Divine Mercy. He expressed gratitude to the Blessed Mother for his vocation. "She's been with me since the beginning. She's been another mother to me," he said.

Brother Nicholas, MIC, from New Jersey, said his vocational journey began in the fourth grade when he made his first consecration to the Blessed Mother. He has expressed gratefulness to his parents, Laura and Len, for nurturing him in the spiritual life by their words and example and for their unfailing support during his vocational journey.

Father Fidele, from the Democratic Republic of the Congo, DRC, was ordained to the diocesan priesthood 33 years ago, on Aug. 10, 1986. In June, 2017, while serving in Washington, D.C., he came across the motto of the Marian Fathers' Coat of Arms, "Pro Christo et Ecclesia," which translates, "For Christ and the Church." He said to himself, "This is the way to go to clarify the world's current state of confusion."

"Pro Christo et Ecclesia. That's me!" Fr. Fidele said, following his first profession of vows with the Marian Fathers. "Please pray for me. God has given me 33 years as a priest. I pray that He gives me another 33 years as a Marian priest."

'His Witnesses'
In his homily, Fr. Kaz reflected on the meaning the day — both from the standpoint of men professing religious vows and the Solemnity of Mary's Assumption.

Mary's Assumption, in which she was raised body and soul into Heaven, is a foretaste of what God has in store for each of us. Father Kaz noted that while the Assumption is a special time to honor Our Lady, it also provides an opportunity "to celebrate what God wants for us."

He advised the men to pattern their lives on Mary — her holiness and her continual calls throughout history to turn from sin, repent, pray, and follow her Son faithfully.

Addressing the five men, Fr. Kaz noted the enormous role God has given to the Marian Fathers to play in the Church and the world as official promoters of the Divine Mercy message given to the world through St. Faustina.

"We, as Marians, were given this wonderful gift ... this privilege, under the guidance of Our Lady. So we have to live our lives faithful to the calling. ... We must help Him to save souls."

Following the liturgy, Fr. Kaz extended special thanks to the Marian Helpers in attendance.

"We're very, very grateful to God for giving us incredible people like you to help us fulfill our mission," he said. "Thank you for your sacrifices. But above all, I ask you to pray for these men, pray for our province, pray for this ministry, and for all of those who are associated with us."

The assembled Marians then sang in Latin the Marian hymn, Mater Dei Immaculata. The final verse capped a beautiful Mass: Virgo virginum praeciara / nobis tessera sit cara: / Pro Christo et Ecclesia ("O admirable Virgin of virgins / may this motto be dear to us: / For Christ and the Church").

If you feel called to support our Marian seminarians, please visit marian.org/seminarians or call 1-800-462-7426.