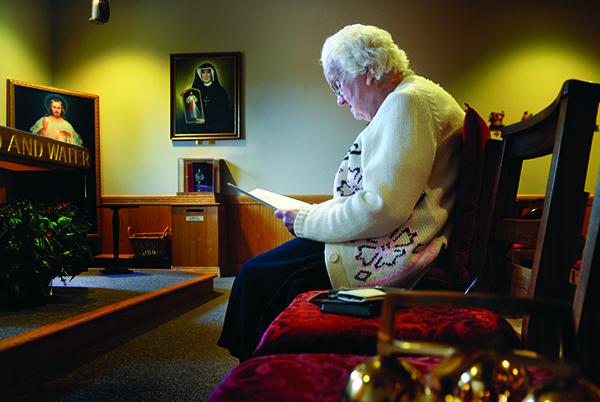 By Felix Carroll (Dec 28, 2016)
Our dear friend Blanche Koprek died on Dec. 27, 2016. Blanche worked for the Marian Fathers in Stockbridge, Massachusetts, for some 60 years. The following feature story on Blanche first appeared in the spring 2015 issue of Marian Helper magazine. May Blanche Koprek rest in peace.

Please pray that God would give me strength. My husband walked out on me this week.

Please pray for our newborn daughter who is having seizures.

Be advised, rest assured: When you send in a request for the lighting of a votive candle for your intention at Our Lady of Mercy Candle Shrine located in the Marian Helpers Center, Blanche or one of her fellow intercessors gets word and prays for the intention.

'A lot of people are struggling'
Twice a week, Blanche volunteers her time to pray individually for hundreds of intentions sent in to the Marians' Divine Mercy Intercessory Prayerline.

Each morning in the softly lit oratory adjacent to the Prayerline's office, Blanche takes her position in the front pew, left side. She has with her stacks of prayer intentions, tapped and neatened up at their edges. One by one — for hours — she reads them to herself before the Blessed Sacrament while praying for the outpouring of the Holy Spirit. It's an emotionally demanding role.

"People need prayers," says Blanche. "A lot of people are struggling — really struggling. I feel privileged that I can help."

A paradox personified, Blanche is short in stature but a spiritual giant; bent earthward but focused upon heaven; hard of hearing but keenly alert to the tread of others' misfortune. She's a small-town girl bounded by the big picture. She's practically oblivious to world events, yet well versed in the matter of most consequence: Jesus seeks to save souls, He requests our help, and He hears our prayers.

"With Blanche, we all feel like we're rubbing elbows with a living saint," says Cathy Chichester, the Prayerline manager.

A fixture, a spiritual force
Blanche, who turns 93 on March 24, has been a fixture at the Marian Helpers Center for nearly 60 years, beginning as a staff member and now as a volunteer in her retirement.

Born and raised in the tiny, chimney-topped town of Housatonic, Massachusetts, near Stockbridge, Blanche comes from salt-of-the-earth Polish stock. She had three brothers. Her parents worked at the textile mill. Her mother, Teofila, taught them all to pray. Blanche says that was the greatest gift she ever received.

Her mother kept religious statues and paintings in every room of their three-story Grove Street duplex, where Blanche still lives. Nearly everything remains in place, including a framed certificate from Blanche's First Holy Communion.

"The right one never came along," she says, with a God's-will-be-done shrug.

Prayerline employee Br. Paul Brandt, FSD, picks her up and drives her home. She rarely ever calls in sick, but if she does, she'll profusely apologize.

"This is her special time with Jesus," Cathy says, "and if she can't make it, she looks at it like she's letting the Lord down."

She leads a simple life.

In her second-story bedroom overlooking the village of Housatonic, Blanche irons the altar cloths and vestments for her parish, Blessed Teresa of Calcutta. She's a lector there on weekdays. She continues to make it a point to visit friends and family who are infirm.

She doesn't watch television. She doesn't listen to the radio. Once she gets home, she removes her hearing aid to save the battery.

"Blanche knows what she needs to know," says Br. Paul, who first met Blanche in 1963. "She sees the sadness of the world. She lives the realities of the 150 to 200 people whose prayer intentions she reads each day, and those realities profoundly affect her."

Blanche concurs with that.

"Sometimes I do need to put the prayer requests down for a moment and take a little walk," she says. "That helps, and so does praying the Stations of the Cross."

Timeless sense for modern times
With equal parts wistfulness and worry, Blanche will lean in and share stories of simpler times. (You could cross-check her memories with paintings from the same era by Norman Rockwell, who lived nearby.) Love of God came first, families stayed together, and, by and large, the culture conducted itself under a common moral code.

Her recollections serve as a benchmark against a sobering shift in a society that clearly needs prayer. Broken marriages, substance abuse, sexual promiscuity, suicide, pornography — these are the ills cited in many prayer requests submitted to the Prayerline.

And that's a lot.

Having gathered a stack of prayer requests in the Prayerline office on a recent morning, Blanche shuffles into the adjacent oratory to settle in. She never feels alone in there because she isn't.

"I'm always with Jesus," she says, pointing to the tabernacle, "and I'm so fortunate."