Home » News » Each Name Has a Story

Each Name Has a Story 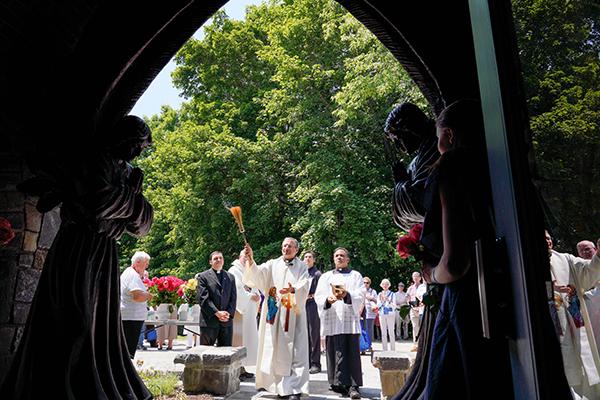 And each name held by this sacred memorial contains a story.

Before the rededication ceremony, to a crowd of about 200 pilgrims at the Mother of Mercy Outdoor Shrine, several mothers spoke about their beloved children whom this shrine remembers.

One story came from Suzanne deFriesse of New Milford, Connecticut.

For 30 years, Suzanne carried the guilt, shame, and regret of having aborted her own child. She said that from the time she was driven to the hospital for an abortion during her junior year of high school, "I have lived with a very deep hole within me. Not only did my oldest child die that day, but a part of my soul died as well. I shut down not only emotionally, but spiritually as well. I did not think that God could ever forgive me. My life was literally in chaos for many years after that. I went to some pretty dark places."

In her 30s when she discovered her Catholic faith, she confessed her sin of abortion in the Sacrament of Reconciliation — again and again. She said, "My heart held onto my prideful self-condemnation. I was essentially throwing God's mercy back in His face."

But then she went to the National Shrine of The Divine Mercy to attend a retreat led by Rachel's Vineyard, a Christ-centered ministry that helps women and men heal from the grief of abortion. It was the first such retreat the Marians ever hosted, and it changed everything for her. She embraced God's mercy and learned self-forgiveness.

"While I had lost sight of who I was in God's eyes, He never did. He was waiting for me to turn back to Him and trust," she said.

For the past seven years, she's been coordinating the Rachel's Vineyard retreats on Eden Hill, helping others overcome their own grief.

Forty years ago, Kathy asked her attending nurse in the maternity ward why she could no longer hear her baby's heartbeat on the monitor. "I will never forget the disheartened look on her face as we exchange glances. No words were needed. I knew my baby had died in my womb."

Years later, Kathy was praying the Chaplet of Divine Mercy at the bedside of her own dying mother. "Through the grace of God and the power of the Chaplet ... [my mother] had beautiful visions of Heaven. The one thing she saw and was able to share with me [was about] my two children that I had lost. [My mother told me] that they were at each sides of my shoulders. Whenever I moved about the room, they followed me," she said.

Her mother also told her, "God allows them to be here because I'm dying and they're here to comfort you."

Kathy concluded that if God allowed her deceased children to comfort her, then they must know her, love her, and be interceding for her and her entire family.

"I found God's hidden grace in the midst of my greatest suffering, the loss of a child. These are pure innocent souls who never knew sin, praying for me and for my entire family. What a blessing it is to have children in Heaven."

Kathy went on to become the founder of the Disciples of Divine Mercy in the Holy Face of Jesus, a lay association of faithful, which ministers to the dying. She's also authored the books Open my Eyes and At the Bedside of the Sick and Dying.

One last story comes from Betty Doty of Sandy Hook, Connecticut. She lost three children, all at different times, and had never shared her story publicly before.

The first child she lost died 72 hours after his birth.

"I have to admit, that I did not understand why God did this to me. There was resentment, I was angry. I said, 'Why me?' I would have loved this child as I loved my other children."

She questioned whether or not God was punishing her for something she had done.

Then tragedy came once again. When her daughter was 3 1/2, she was struck by an automobile. She took her last breath in the street, cradled in Betty's arms. "I didn't understand that one either. But again, I turned to God," she said.

She said that this tragedy caused her marriage to fall apart. "But my life went on because I had to be strong for my children who were living," she said. "Mary became my friend. I realized that at Mass ... she is there as the priest holds the Body and Blood of Christ and offers it to God the Father. And so, at that point do the same thing with my children."

"But then He called on me again," she said.

In 2014, her oldest son, an aeronautical engineer, died unexpectedly of a heart condition at age 55. "He was brilliant. ... He had things that went up in space and we were proud of him ... and he was like the father figure of our family," she said.

Again, she questioned if she had done something to disappoint God.

She said, "But Mary taught me through Jesus that even St. Peter had moral disappointments. He walked on water with Christ and he trusted in Him, but he denied Him and he was heartbroken ... [So] God taught me that I was a strong woman. You are never strong until there is no other choice but to be strong."

After the rededication ceremony, the Very Rev. Fr. Kazimierz Chwalek, MIC, the Marians' provincial superior, said, "For those memorialized here ... behind each name is a story. I was very moved by the faith of these women, by their acceptance. I also spoke with many others and in the same way they had their own stories. They had stories of God's love and mercy for them and their sense of love by God no matter what has happened to them.

"But there are countless people who are still trapped in their own fears and worries. They just don't want to open up, and they suffer quietly. I feel that we should not only pray for them, but we should let them know that if they open their hearts to Christ, He will ... heal their memories and their pain."

Visit memorialsonedenhill.org/sothi to learn about memorial opportunities at the Shrine of the Holy Innocents.