Home » Stations » News » At the Cross 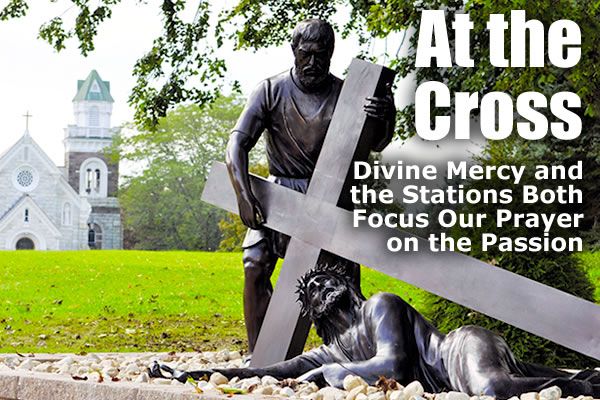 In the 1931 movie version of "Frankenstein," there's a memorable scene where the mad doctor sees his creature move: "It's alive," he repeatedly screams.

The arresting sight of something dormant coming to life cannot fail to elicit dramatic reactions. In an infinitely more beneficial way than a fictional tale, to see someone's otherwise lukewarm or dead faith spring to life excites us more than words can describe. We often hear of this when someone refers to being "on fire" — as in, "I'm on fire for Divine Mercy."

How do you achieve this joyous state? Do you wait for all your problems to disappear? No. We will always face problems. In fact, as Christians, we are invited by Jesus to take up our crosses and follow after Him. Do we wait to be visited by a heavenly being or transported into some ethereal realm? No. That ordinarily does not and should not happen. So how, then, can we enter into Christian joy?

'For the Sake of His Sorrowful Passion'
The message of Divine Mercy and the Stations of the Cross provide an answer. This pairing is not an accident, for both present Jesus, our merciful Savior, in the act of redeeming sinful humankind. He gives us victory through His Passion, death, and Resurrection. He is the source of our joy.

When we accept The Divine Mercy, we welcome the Way, the Truth, and the Life — the path back from the despair of sin and into full friendship with God. Likewise, when we meditate on the 14 Stations of the Cross, we can receive a visceral appreciation of just how much God loves us, that He sent His Son to assume human form and die a tortuous death in reparation for our sins.

In fact, both Divine Mercy and the Stations focus our meditation and prayer on Jesus' Passion and death. During the Chaplet of Divine Mercy, for example, we pray, "For the sake of His sorrowful Passion, have mercy on us and on the whole world" (Diary of St. Faustina, 476).

Also, the Hour of Great Mercy, the hour Christ died on the cross, is part of the message and devotion. Jesus told St. Faustina to "immerse" herself in His Passion every day at 3 p.m., "the hour of great mercy" (Diary, 1320). Further, He recommends that she pray the Stations during this time, "My daughter, try your best to make the Stations of the Cross in this hour, provided that your duties permit it" (Diary, 1572).

Life-sized Stations at Shrine
It's no accident, then, that God brought to the Marian Fathers, who promote the message, a generous benefactor whose gift is making possible the commissioning and installation of a life-sized Stations of the Cross on the grounds of Eden Hill at the National Shrine of The Divine Mercy in Stockbridge, Mass. The dramatic stations — whose installation are slated to be completed at the end of August in 2012 — provide a breathtaking, new look at the hard road Jesus took to His death at Golgotha.

"The life-sized stations are truly impressive," says the Very. Rev. Fr. Kazimierz Chwalek, MIC, provincial superior for the Marian Fathers in the United States and Argentina. "When you look at the realism of our Lord's suffering, you realize: God didn't give us a symbolic redemption. He redeemed us by sending His only Begotten Son to be born and live like one of us, like all of us, except He was without sin. Jesus suffered for our sins precisely according to our nature as human beings. How can anyone realize this and not be moved by [such] love?"

The tie in with Jesus' redemptive suffering can be seen in "what lies at the core" of Divine Mercy, says Fr. Michael Gaitley, MIC, who as "Fr. Joseph, MIC," directs the Association of Marian Helpers.

'New Reminder of a Timeless Message'
Jesus came to St. Faustina as The Divine Mercy, Fr. Michael says, and revealed Himself in this way, so we would have "a new reminder of a timeless message: That God loves us, that no matter how much we have sinned, if we have a repentant heart, He will always take us back. That's why there's so much interest throughout the world in Divine Mercy. People hunger and thirst for it."

Our merciful Savior, Fr. Kaz says, revealed Himself to St. Faustina, and through her, the world received the message of The Divine Mercy. As Fr. Michael points out, the mercy of God wasn't a new concept when Jesus appeared to St. Faustina in the early 1930s. It has been woven throughout time, going back to humanity's earliest moment. It was God's mercy that sent Jesus on the Way of the Cross depicted in the stations. It is Divine Mercy that continually calls us back to the Lord, even as we stumble.

Perhaps Pope Benedict XVI put it best in his Regina Caeli message of March 30, 2008, which was Divine Mercy Sunday: "Indeed, mercy is the central nucleus of the Gospel message: It is the very name of God, the Face with which He revealed Himself in the Old Covenant and fully in Jesus Christ, the incarnation of creative and redemptive Love."

Eden Hill, as home of the National Shrine and the Marians in the United States, is the perfect place to combine Divine Mercy and the Stations of the Cross. It is, as Fr. Michael puts it, "A powerhouse of God's mercy for us all."