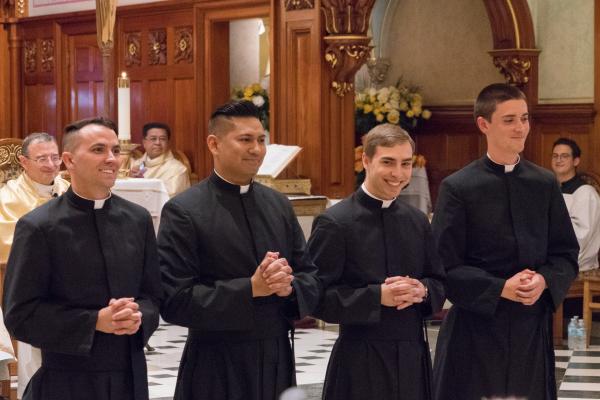 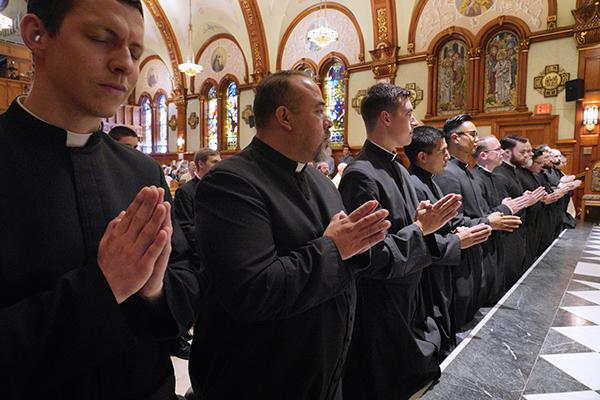 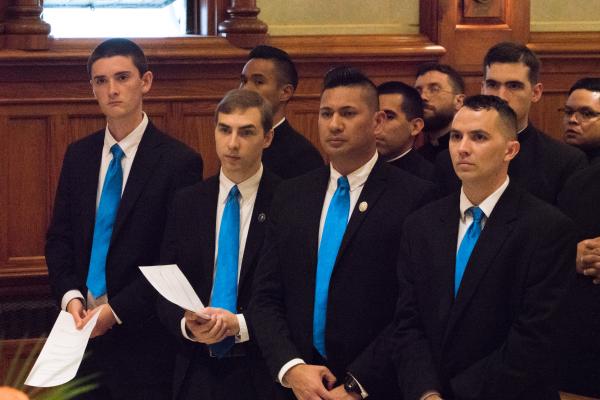 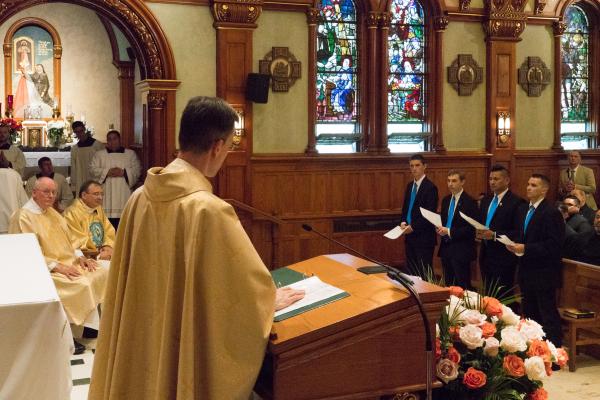 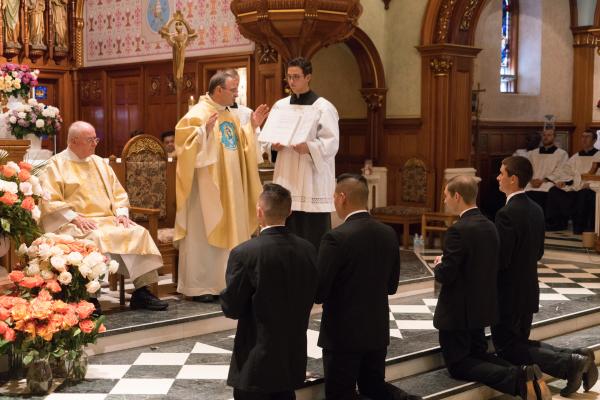 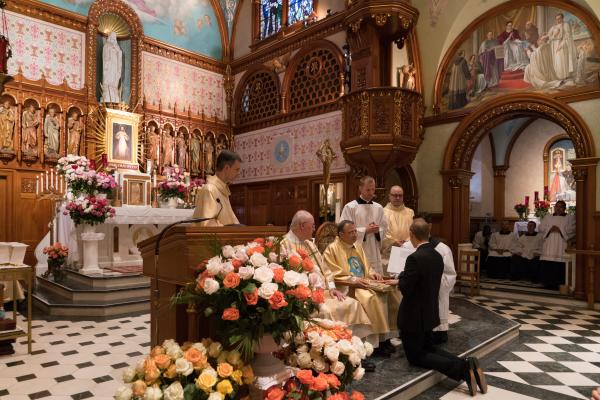 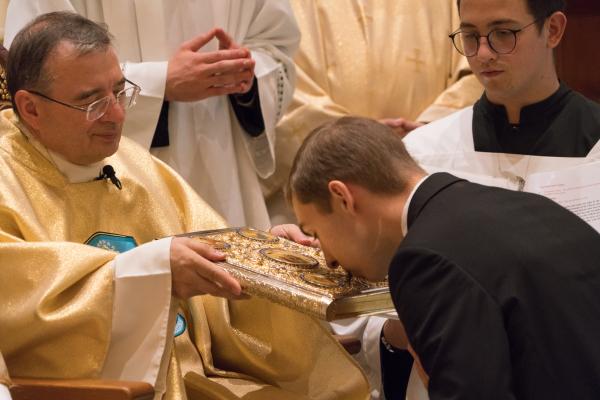 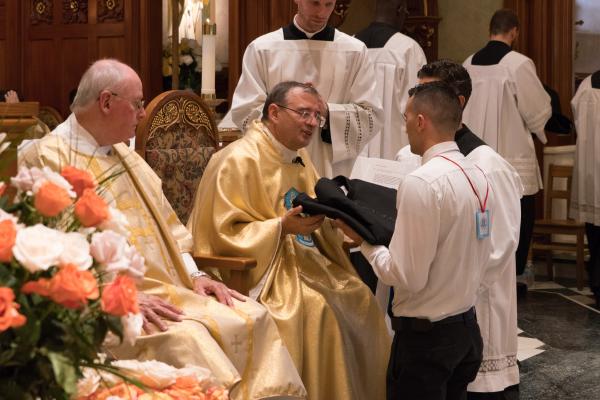 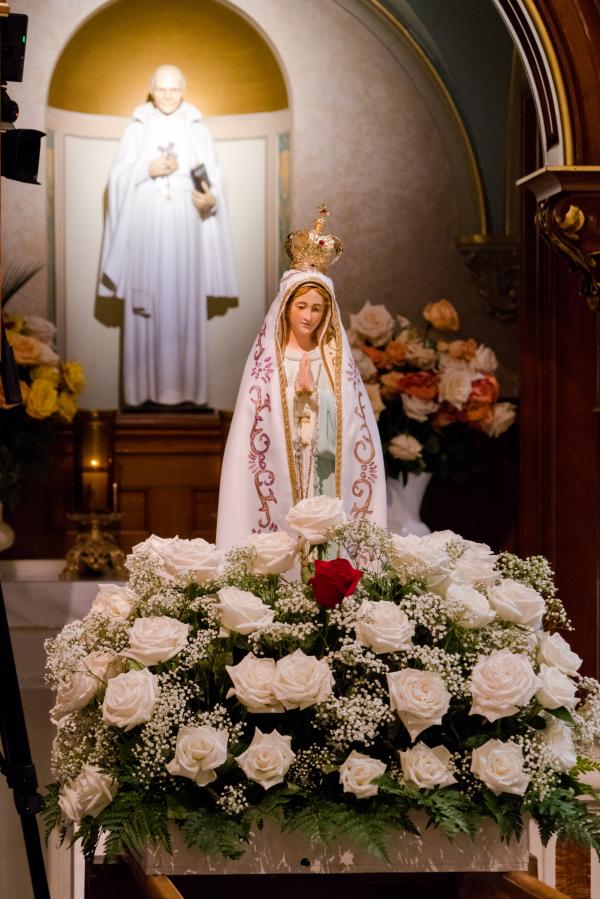 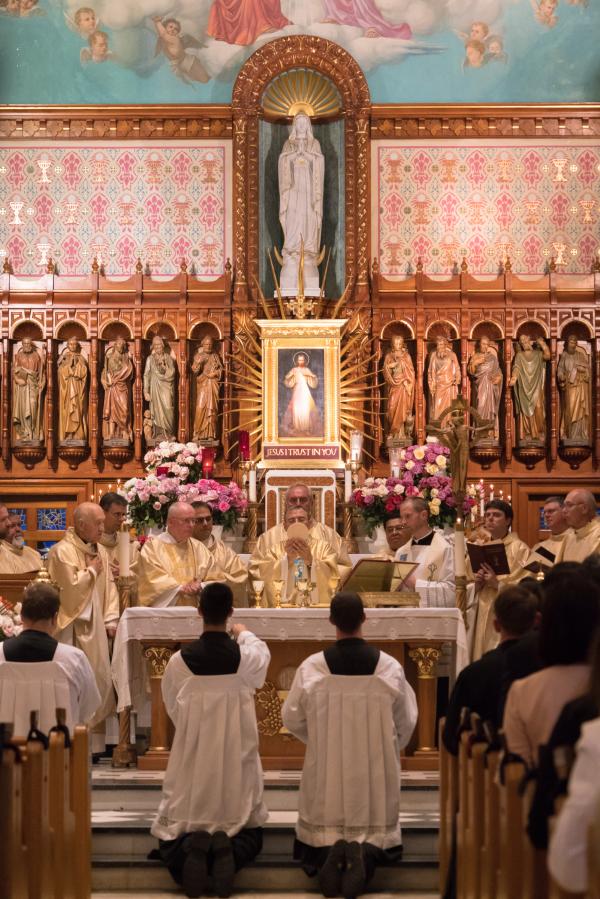 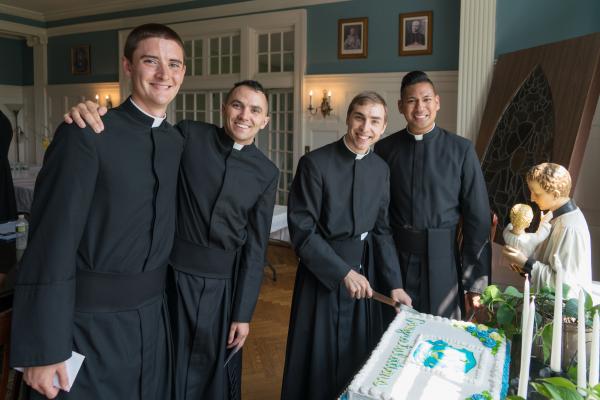 The Marian Fathers of the Immaculate Conception continue to be blessed with the richness of new vocations, as evidenced on the Solemnity of Mary's Assumption into Heaven when four men professed their religious vows for the first time.

During the 10 a.m. Holy Day Mass on Aug. 15 at the National Shrine of The Divine Mercy in Stockbridge, Massachusetts, the four men in turn knelt before their superior, placed their right hands on the Gospel, and solemnly pledged to be true to the Marian constitutions as they willfully assumed the responsibilities and sacrifices summed up by the three classic virtues of chastity, poverty, and obedience.

"My heart is so filled with gratitude to God," said the Very Rev. Fr. Kazimierz Chwalek, MIC, the provincial superior of the Blessed Virgin Mary, Mother of Mercy Province, which governs the Congregation throughout the United States and Argentina. "He's brought so many faithful men who want to work for the Church and for Christ and who want to introduce to those who don't know that God is real, that He loves us, and that He has a special future with us — a future with Him and with all the saints."

The Marians now have more than 30 men in formation in the United States.

Father Kaz accepted and confirmed their one-year vows on behalf of the Marians and the Church before a standing-room-only crowd of family, friends, and Marians.


May God accomplish this in me with the help of this holy Gospel and the intercession of Mary Immaculate, St. Stanislaus our Founder, and all the saints.

With the vows confirmed, they became Br. Patrick, Br. Alex, Br. Michael, and Br. Andrew, with the suffix "MIC" indicating their membership in the community.

Following the profession, Fr. Kaz proclaimed: "I earnestly commend you to God Almighty and to Mary Immaculate, our Mother and Patroness, that you may be able to joyfully and faithfully carry out your vows, unite with God, [and] attain holiness and eternal life."

He then presented the new brothers with the Blue Scapular of Our Lady, which serves as a sign that they hereby honor and imitate Mary and give to Christ their undivided service in the Church.

The four new brothers then processed to the sacristy, where they, for the first time, donned ecclesiastic garments. The change of clothing symbolizes putting away of the old life and taking up of the new. Father Kaz prayed that God "remove from your heart the vanity of this world, which you renounced at your Baptism. May the Lord vest you in 'the new man,' who was created according to God in justice and true holiness."

The men then received an extended round of applause from those assembled, including the many Marians from around the country.

'A Joyful Time'
Following their profession of first vows, 14 other Marian brothers renewed their vows for an additional year. The 14 knelt in their cassocks in a formidable line that, for its straightness, might have been drawn by an architect. Each man came forward, knelt before Fr. Kaz, professed vows, and kissed the Gospel.

Father Kaz advised the men to pay heed to the words of Jesus to St. Faustina when He lamented how so many people ignore His Real Presence in the Eucharist. Jesus said:


My hands are full of all kinds of graces which I want to give to the soul. But souls do not even pay attention to Me; they leave Me to Myself and busy themselves with other things. ... They treat Me as a dead object (Diary of Saint Maria Faustina Kowalska, 1385).

The Assumption and Us
By design, the Marians choose each Solemnity of the Assumption of Mary for the profession of vows. Mary's Assumption, in which she was raised body and soul into Heaven, serves as a foretaste of what God has in store for each of us.

God desires to see us in Heaven, and the Assumption provides evidence that He spares no effort to get us there. One such effort is evidenced in the grace He gives to consecrated religious, who live as witnesses, models, and examples for the rest of us, showing us that holiness is attainable.

Father Kaz referred to Mary herself as "the ultimate witness and model." He urged the newly professed, his Marian brothers, and the assembly to pray that all will one day be in Heaven, "as she is," both body and soul. The key, he said, is to surrender our will as she did, trust in her Son as she did, and be open to His guidance as she was.

The second reading, from St. Paul's first Letter to the Corinthians (15:20-27), underscored that point. It reads, in part, "The last enemy to be destroyed is death, for he subjected everything under his feet." Christ invites us to stand with Him and to stand with Mary so that we can attain our ultimate victory over death.

For the love of Our Lady, following the liturgy, the assembled Marians sang in Latin the Marian hymn, Mater Dei Immaculata. The final verse capped a beautiful Mass: Virgo virginum praeciara / nobis tessera sit cara: / Pro Christo et Ecclesia ("O admirable Virgin of virgins, / may this motto be dear to us: / For Christ and the Church").

Sons of Mary
Inspired by Mary, the ultimate witness and model of holiness, the newly professed brothers said they desire to be models and examples to inspire others to holiness.

Two of them converted to Catholicism.

Brother Alex, MIC, 25, says he originally intended to follow in his father's footsteps and become an Episcopal priest. But those plans were scotched when, during the interview process with Episcopalian church officials, they asked him, "Is there any reason you're not Catholic?"

"I didn't really have an answer," recalls Br. Alex, who was raised in Ohio, Virginia, and Pennsylvania.

He felt called to the Marians because of their charism, including their devotion to the Holy Souls in Purgatory and to the mystery of the Immaculate Conception.

"Mary's role in salvation — why didn't anyone tell me this earlier," Br. Alex says with a laugh. "Amazing to think that we have someone [Mary] constantly praying for us. She is the Mother of God Almighty, but she's also our Mother. There's that tenderness; we're her children, and so she's going to do what's best for us. Through all our own stupidity and weakness, she's still there cheering for us. That's huge."

Brother Andrew, MIC, 29, from Medford, Oregon, also converted to Catholicism. In his case, he was an atheist and then a Protestant until he felt an interior call from Mary. This call reached full pitch once he heard the powerful conversion story of Fr. Donald Calloway, MIC, the Marians' vocations director, and then began reading the books of Fr. Michael Gaitley, MIC.

"I felt called to the Marians because they proclaim the authentic Gospel message and they proclaim that you can have a relationship with Mary," Br. Andrew said. "If I had known about that in high school, that would have been really helpful. But even so, because I was once an atheist, I think I have a lot to offer in terms of evangelizing the unbelievers."

Brother Patrick, 22, of Savannah, Georgia, came to know of the Marians through his father, Griff.

"He has a strong devotion to the Divine Mercy, and I would pray the Chaplet of Divine Mercy growing up," Br. Patrick said. "I took some pilgrimages with him to the National Shrine of The Divine Mercy and met some of the Marians, and I felt the Lord was calling me here. Praise be to God, here I am."

Asked to describe his feelings following his profession of vows, Br. Patrick said, "Just joy. Some days it's hard to thank God for different things going on in your life. Thanking Him was not difficult to do today."

Brother Michael, MIC, 28, of San Diego, California, said he, too, was drawn to the Marians' devotion to Our Lady and faithfulness to orthodox Church teaching.

"And I find the Divine Mercy message, which the Marians spread, is really the most important message for our times," Br. Michael said. "The world needs a true, authentic definition of mercy."

He said, "Today, I feel very blessed. The Lord is filling me with His blessings."

The four newly professed Marians, all in their 20s, constitute "one of our youngest novice classes we've had," said Fr. Jim McCormack, MIC, the Marians' novice master and prefect of formation.

He said, "They all have a joy, a deep-spirited joy in the sense of fraternal communion amongst themselves, and they foster that in the larger community as well. People are always saying what great guys they are — and they are. They're great guys."

A dear friend of the Marians, Deacon Bob Digan from nearby St. Mary's Parish in Lee, Massachusetts, proclaimed the Gospel and assisted at the altar. Brother Ken Galisa, MIC, and Mary Flynn lead the music ministry.

Following Mass, the assembly gathered in the Great Room at the Marian monastery attached to the National Shrine to enjoy lunch. The four new brothers each addressed the crowd, thanking them for their prayers and support. They also thanked Jesus, Mary, their novitiate master, family, and friends for praying them through their novitiate year.

Watch the profession of vows in its entirety here: