Home » News » Back to Beauty 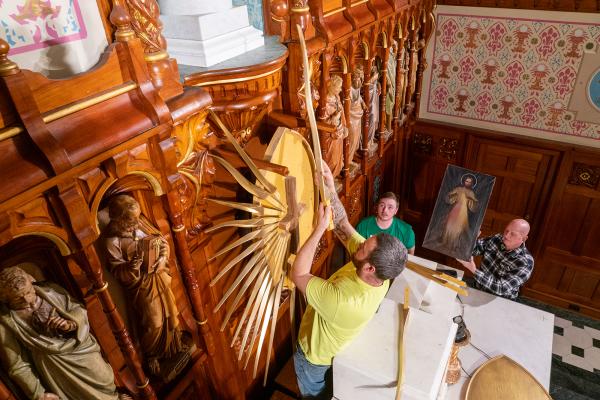 Wouldn’t you know it: Reaching the heavens proved most difficult of all.

High upon ladders and scaffolding, a group of artisans this past week completed the most grueling and visible portion of renovation work on the Berkshires’ most famous chapel, the National Shrine of The Divine Mercy.

The Shrine, featured daily at the “3 o’clock hour” on the worldwide Catholic television network EWTN, has been closed since Jan. 13. Undergoing the most extensive renovations since its construction 60 years ago, the Shrine will have new flooring, new lighting, and a new sound system, all in time for its reopening by Ash Wednesday, Feb. 26.

“It’s been a long time coming,” said Shrine Rector Fr. Anthony Gramlich, MIC. “What’s really exciting is the uncovering of the beauty that has been there all along, but it’s been hidden. All the work being done has just been spectacular.”

A Texas-based restoration company spent two weeks painstakingly tending to nearly every square foot of ceiling and wall surface, portions of which were covered in soot from decades worth of candle and incense smoke.

Much of the Shrine’s extensive decorative stenciling and faux finish had to be touched up or entirely reproduced. A sullied statue of the Virgin Mary set high in a central wall recess was treated to an immaculate cleansing, as were the somber-faced statues of the 12 apostles, the Shrine’s mosaics, paintings, and Stations of the Cross. A series of stained-glass windows depicting joyful mysteries, the crowd-packed preaching of an itinerant savior, and a certain prodigal son, were cleaned as well as repaired.

Water damage from a roof leak years ago had caused the heavens themselves to flake off on the Shrine’s central figurative image — that of the Father, Son, and the Holy Spirit set against a backdrop of celestial blues and misty whites.

Indeed, reaching the heavens, about 35 feet above the altar, and matching their original color, proved the most difficult task of all.

“I was realizing that this was my opportunity to get as close of an understanding as I could of what Michelangelo experienced when painting the Sistine Chapel,” said Richard Byrne, who runs Artisan Restoration International of Dallas, Texas, with his wife, Donna.

The Byrnes were joined by artist Tina Cantelmi, providentially from the town of Bethlehem (Pennsylvania). Cantelmi, who prefers to listen to Bruce Springsteen while she’s working, settled for Gregorian chants out of reverence for the sacred space.

The Byrnes said they were honored to be given the commission by the Marian Fathers of the Immaculate Conception, the administrators of the Shrine.

“That they gave us their most prized possession, in a sense, to take care of — that means a lot to us,” said Richard Byrne, a self-described non-Catholic Christian smitten with Catholic artwork and architecture.

“Part of the task at hand is to honor the craftsmen and volunteers who poured so much time and effort into the construction of the chapel,” said his wife, Donna Zarbin-Byrne.

Indeed, the construction of the Shrine proved a parable unto itself. The Marian Fathers broke ground in 1950 on what was originally called the Divine Mercy Chapel. For the Marians and a crew, including volunteers, the 10-year effort was an ad hoc affair, a lesson in patience and stamina commensurate with the ebb and flow of donations and labor to complete it.

The work was overseen by an Italian immigrant, Antonio Guerrieri, a woodworker who lived down the hill on Main Street who had considered himself more or less retired until the Marians came knocking. Aged 74 at the time construction began, Guerrieri would never put onto paper any formal architectural or decorative plans beyond simple sketches. Yet, somehow it all came together.

Brother Leonard Konopka, MIC, was among the Marians pressed into service as laborers for Guerrieri. He recalls spending the summer of 1951 chipping off the mortar of bricks and stones brought in from the former Williston Academy in Easthampton and the former powerhouse from the old Westinghouse estate in Lenox.

In 1996, the United States Conference of Catholic Bishops designated the chapel a “national shine,” thereby acknowledging its significance as a pilgrimage site devoted to promoting the mercy of God.

Before they set about their restoration work in mid-January, Richard and crew were debriefed on the Shrine’s historical and religious significance.

“When you look to its history,” said Richard, “you learn of these craftsmen who toiled on this. For them, it was a spiritual work. They considered themselves instruments of God’s glory. They were really quite humble. Everyone who was responsible for building this place did so for the common glory of God. It’s really an amazing thing.”

For Richard, among the highlights of the restoration was to retrace and recreate sections of the orderly and imaginative stencil work throughout the Shrine. When they learned that the original artist, the late William Twarog, was also responsible for decorative work inside St. Stanislaus Kostka Church in Adams, the crew took a road trip to Adams to have a look.

“It was purely curiosity and anxious anticipation to see what else he’d done — and admiration of the man,” said Richard. “For us, it was like discovering a painter like Goya or someone: You just want to go find more of it to see.”

Still, Richard said the most inspiring moment of the two-week restoration had nothing to do with restoration at all.

At one point on Thursday he noticed two men peering through the Shrine door. He went to the door to let them in. Turns out one of the men was blind. Donna suggested that Richard take down one of the newly refurbished carved Stations of the Cross and allow the man to feel its contours.

“He ran his hands over it, reading it like braille,” Richard said. “This man who lives in darkness seemed to get so much light from just coming in here and feeling this piece of artwork. He was so happy. Seriously, I won’t ever forget that for the rest of my life."