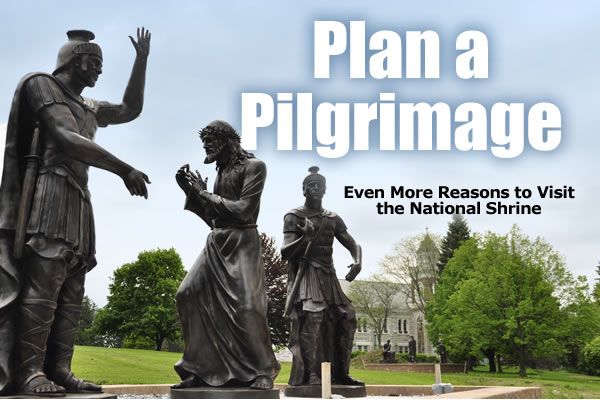 Thursday, May 26, 2011
Even More Reasons to Visit the National Shrine of The Divine Mercy

Exciting things are happening on Eden Hill in Stockbridge, Mass. — exciting things that are sure to enhance the spiritual experience and safety of pilgrims visiting the National Shrine of The Divine Mercy and its grounds.

Perhaps the most noticeable addition to the landscape will be the installation of the first four Stations of the Cross on the hillside lawn facing the National Shrine. Life-size figures of Jesus, Mary, Pilate, and various Roman soldiers mark the beginning of the sorrowful journey that is our Lord's Passion.

The figures are not only life-sized, but incredibly life-like. With a resigned look, Pilate washes his hands of Jesus' death. The sorrowful countenance of Jesus says it all, as He is flogged and falls for the first time. Mary's face is tortured as she shares in the agony of her Son.

The four stations arrived on Eden Hill on April 19, and were to be installed soon afterward. Stations five through nine are being cast and are expected to be delivered and installed in late July or early August.

The stations are sure to lead to deeper devotion to the Lord's Passion and are expected to increase the number of pilgrims to the grounds of the National Shrine. The stations are a gift from a generous Marian Helper. The donor worked closely with the artist and the Marians to agree on the design of the stations and especially the faces of the figures.

"These Stations of the Cross will provide a powerful meditation on Christ's Passion and death and the sorrows of Our Lady. There is no better way to understand the message of Divine Mercy," says Fr. Richard Drabik, MIC, the Marians' director of grounds.

Another notable improvement at the National Shrine is the installation of new granite stairs at the entrance of the National Shrine. The original stairs were badly worn from 50 years of foot traffic, and many pilgrims had difficulty with the steepness of the steps. The new stairs are wider, safer, and easier to climb.

Later this year, a marble statue of a kneeling, praying St. Faustina will be installed facing the Shrine. The statue was commissioned in Italy for the Marians and is a gift from another generous Marian Helper.

"With the National Shrine, the new stations, and the statue of St. Faustina, Eden Hill will solidify its position as the leading Divine Mercy destination in the United States," Fr. Richard said.

Also available for pilgrims is a reception area and pilgrim information center located in the National Shrine in the space of the former gift shop. Our gift shop has been expanded and moved to the former gym adjacent to the Marian Helpers Center. The new space gives us a greater ability to display larger items such as statues and wall hangings. The National Shrine has an ambitious schedule of ethnic celebrations and feast days throughout the summer, and fall.

Check out our calendar.

Learn more about pilgrimages to the National Shrine.