Pilgrims Progress — at the National Shrine of The Divine Mercy 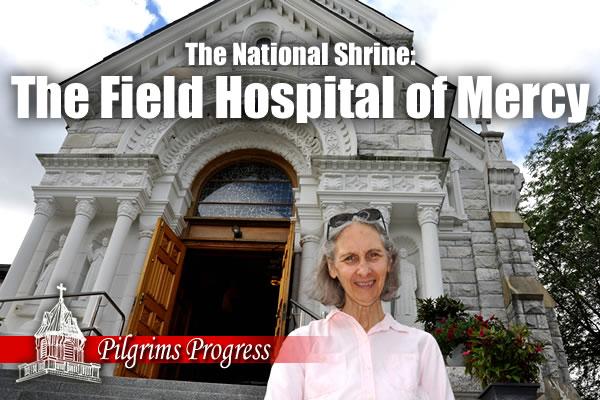 Each year tens of thousands of pilgrims visit the National Shrine of The Divine Mercy on Eden Hill in Stockbridge, Massachusetts. Who are they, and what draws them here? The following is the latest in our "Pilgrims Progress" series. Meet Jennifer Millet:

Four years ago, Jennifer Millett happened upon the Diary of Saint Maria Faustina Kowalska in a bookstore and her life was changed forever!

Jennifer, from Kinderhook, New York, suffers from chronic autoimmune conditions and pain. Four years ago, her physical ailments were worsening day by day. The suffering was so intense that she was consumed by fear, hopelessness, doubt, and darkness. A non-Catholic, Jennifer embarked on a spiritual quest to find meaning for all of this suffering. She began to carry a rosary with her, but didn't know how to pray it. She would say a prayer or recite Scripture on each bead and her love for Our Lady increased every day.

She also began to read the lives and writings of the saints and other Christians: C.S. Lewis, Thomas Merton, St. Augustine, St. Therese of Lisieux, St. Teresa of Avila, and St. Bernadette of Lourdes. This is when she happened upon St. Faustina's Diary. She saw in St. Faustina and these other saints that their suffering was transformed by complete and total abandonment and trust in Jesus and His mercy. Jennifer realized for the first time that her suffering could be redemptive, that it had meaning and purpose, just like the saints she read about. She now wanted to unite her sufferings to Jesus' suffering on the Cross, trusting that Jesus would sustain her and bring her closer to Him.

"Instead of a victim mentality," Jennifer said, "I had a new direction, purpose, and focus — that of surrender, trust, and offering this suffering up to our merciful Jesus."

Jennifer soon enrolled in Rite of Christian Initiation of Adults courses at her parish, and a hunger for the Eucharist grew in her heart as she began to attend daily Mass, when physically able. She would stay after Mass to pray the Rosary, where she finally learned the Mysteries and the prayers of the Rosary, and she went on Fridays to Adoration.

As she finished reading the Diary, she saw pictures of the National Shrine of The Divine Mercy in the back of the book, and she realized it was only 45 minutes away from her home! Due to her physical ailments, traveling to the Shrine was difficult for her, but once she stepped onto Eden Hill, she instantly felt like she was stepping onto Holy Ground.

While at the Shrine, Jennifer bought a four-way cross, whish has the Sacred Heart at the top, St. Christopher on the right, the Blessed Mother at the bottom, and St. Joseph on the left. On the way home she noticed on the back of the cross it read, "I am Catholic, please call a priest." It brought a huge smile to her face as she knew she had always meant to be Catholic in her heart.

"I knew that I had found the one true Church formed by Christ and that all was going to be alright," Jennifer said. "I was home — home among the Communion of Saints, who knew how to be holy, how to trust in our Lord's mercy, and pointing the way out for all of us."

On April 26, 2014, Jennifer Millet was received into the Catholic Church.

This summer, Jennifer had an exacerbation of her autoimmune conditions, and her doctor ordered cancer-specific blood tests. She felt compelled to visit the National Shrine of The Divine Mercy for the Sacrament of Reconciliation and Mass.

Due to her illnesses, Jennifer could only receive the Eucharist from a low-gluten Host. Unfortunately, the pyx containing her Host was overlooked and not consecrated in the Mass. Father Thaddaeus Lancton, MIC, the celebrant of the Mass, offered her the chalice with the Precious Blood, but she hesitated since she is sensitive to alcohol. There was a single drop left in the chalice, so with an open mind and a willing and trusting heart, she received the Eucharist.

"Walking back to my pew I had a strong sense of wholeness, of peace, and just knew on a deep level that I did not have cancer in my blood," Jennifer said. "I chose not to doubt, or to analyze what just took place, but to accept that this was an example of Divine Mercy for me, an undeserving sinner."

After the Mass, she spoke with Fr. Thaddaeus about her physical situation, and he offered her the Sacrament of the Anointing of the Sick. Jennifer could not remember the last time she felt so loved, supported, and nurtured. Tears of gratitude flowed down her cheeks.

Jennifer said, "The Shrine was my spiritual hospital that day. Instead of medications, I was given the Holy Sacraments of healing in full — penance and anointing — by a priest so full of the Holy Spirit, so full of Jesus' love and mercy and peace."

She knew she was strengthened by the Sacraments and given the courage to endure every suffering that came her way. That night, a serious leg contusion that she had on her leg was completely healed, and two days later her doctor called to inform her that the cancer test was negative.

Jennifer loves visiting the Shrine whenever she can, to give thanks to Jesus, the Divine Mercy, and to seek healing and strength to offer all of her sufferings.

She said, "It's all about trust—every moment of every day—Jesus, I trust in You!"

Come make a pilgrimage to the National Shrine of The Divine Mercy. Visit our website for more information.