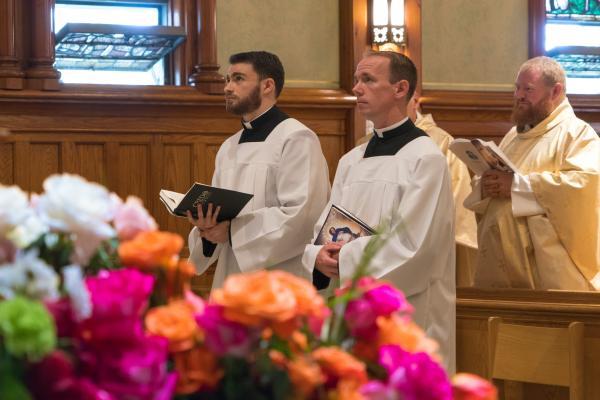 Aug. 16, 2019, Stockbridge, Massachusetts — For the good of the Church and out of love for the Lord and the Blessed Virgin Mary, two men said "yes" to God today at the National Shrine of The Divine Mercy.

Brother David Smith, MIC, and Br. Matthew Tomeny, MIC, professed their perpetual vows, thereby solemnly promising to live in poverty, chastity, and obedience for the rest of their lives as members of the Marian Fathers of the Immaculate Conception.

"I feel a great sense of peace, a great grace from God," said Br. David of Azusa, California, who joined the Marians in 2011.

"I feel peace and joy and security in the Lord," said Br. Matthew of Tampa, Florida, who joined the Marians in 2013.

Both men are pursuing the priesthood.

Both men define the consecrated life they've chosen as one set apart by God in order that, like the apostles, they may dedicate themselves to Christ and draw closer to Him through prayer, love of neighbor, and apostolic works.

By professing their perpetual or "final vows," the two men pledged on their honor to perpetually live "in conformity to the life of Christ, who was poor, chaste, and obedient."

For both men, the Marian motto, "Pro Christo et Ecclesia" (For Christ and the Church), isn't merely obscure Latin words on a Congregation's official crest, but rather serves as an invitation to take action — an action of surrender and assent to a code of life whereby they will strive to do all for Christ and His Church.

The readings chosen by the men for the Holy Mass underscored this commitment.

From Isaiah 61:9-11 come the words: "I rejoice heartily in the Lord, in my God is the joy of my soul; for he has clothed me with a robe of salvation and wrapped me in a mantle of justice."

From 1 Corinthians 7:25-35, St. Paul talks of vocations, of being "free of anxieties" and adhering "to the Lord without distraction."

From Matthew 19:16-26, Jesus instructs us to adhere to God's commandments, to give up material things of the world, and to follow Him.

Reading from the Marian Fathers' Constitutions, Fr. Kaz spoke of what it means to be a Marian.

The "essence," he said, is spreading the mystery of the Immaculate Conception. As the Founder of Marian Fathers St. Stanislaus Papczynski knew, by being preserved from all stain of original sin, Mary became living proof to God's love and care for all of humanity. Through her Immaculate Conception, we find solace that Christ had conquered sin and that we are called to eternal life in Heaven.

Father Kaz also noted the Marians' other charisms — that of praying for the souls in Purgatory and serving the Church where the needs are greatest. He noted the challenge of living the consecrated life at a time when scandal has rocked the Church. But he reminded Br. David and Br. Matthew that "this is Christ's Church. ... We serve Christ."

He advised them to follow in the footsteps of the Marians' Renovator Blessed George Matulaitis, who wrote:

If I may ask, Lord, let me be but a dishrag in Your Church, a rag used to wipe up messes and then thrown away into some dark corner. I want to be used up and worn out in the same way so that your house may be a little cleaner and brighter. And afterwards, let me be thrown away like a dirty, worn-out dishrag.

Father Kaz advised the men to "love the Church. Burn yourself out for it. Don't hold back. Give everything you have — because it's not an 'institution'; it's the Body of Christ, that needs redemption."

"We need to strive, to love the Lord, to fulfill that commandment of love that He has for us," Fr. Kaz said. "So we have to be part of that prophetic witness ... for the greater glory of God."

Among those in attendance for the vows was Br. Matthew's mother, Nelly.

"I'm thankful to God that He answered my prayers," she said, following Mass. "Since Matthew was born, I prayed to the Divine Mercy that Matthew would have a vocation to the religious life — from when he was 10 days old. And then I asked the Blessed Mother to always, always, always protect the vocation, and she did, and I'm so thankful for that. What a miracle, and what a blessing!"

She described Matthew, the fourth of her 10 children, as quiet, kind, a perfectionist, and devout.

"At a young age, when he was 7 years old or 6 years old, he would collect Rosaries and put them in a little treasure box he had," she recalled.

Brother David's mother, Joan, described her son as quiet, funny, and a delight. David is the sixth of her nine children. His vocational call came in 2009, following the death of his father and a pilgrimage to the Holy Land that David took with his mother.

"Father Kaz thanked us for the sacrifices we're making," she said. "But I would say it has been a privilege. How could this be a sacrifice for me? This is a beautiful thing, right? I get to be a mother of a member of the Marians!"

If you feel called to support our Marian seminarians, please visit marian.org/seminarians or call 1-800-462-7426.