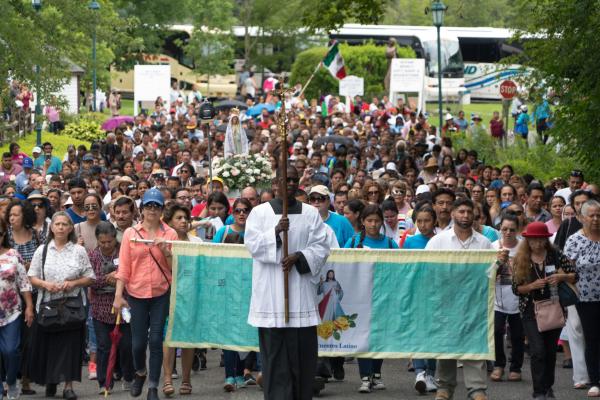 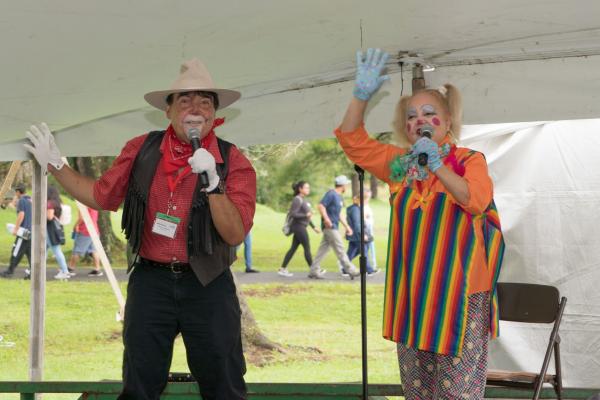 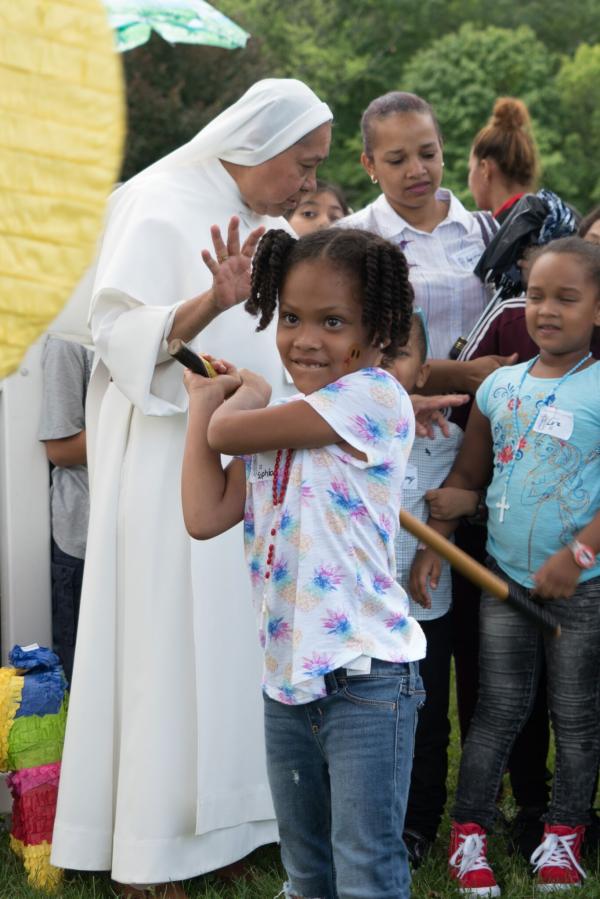 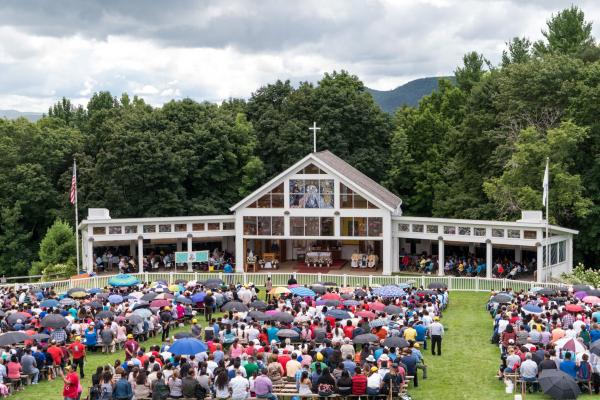 By Marc Massery (Aug 4, 2018)
Folk dancing, piñata breaking, Rosary praying, and story-telling about the power of God's guidance over grief and illness marked the 2018 Encuentro Latino at the National Shrine of The Divine Mercy in Stockbridge, Massachusetts.

Encuentro Latino draws more than 5,000 pilgrims every year from various countries around the world to celebrate Latin heritage, honor the Blessed Mother, worship the Lord, and encounter His abundant mercy.

This year, these pilgrims were blessed to hear from three Catholics of Latin descent whose lives were transformed by God's mercy.

Several years ago, Jose was diagnosed with cancer of the tongue. But upon receiving this grievous news, Jose did not even flinch. He remembered what he used to say to himself when he was in the service in Vietnam, "Whatever happens, it don't mean nothing. That's the slogan we had [in Vietnam]. It don't mean nothing. If you [lived through battle], you lived by God's mercy."

In fact, Jose took his illness as a sign that he was walking in God's ways. So from the very beginning of his diagnosis, he immersed himself in prayer, in particular, the Divine Mercy Novena. He even started his treatment during the days leading up to Divine Mercy Sunday. He said, "I believe what Jesus told to St. Faustina, that those who believe in My mercy will have it."

For three months during his treatment, he could not eat or speak as a result of chemotherapy and radiation. Still, at every one of his 75 treatments, alone in a secluded chamber with a mask on his face, he prayed the Chaplet of Divine Mercy silently.

For the past several years, he's been cancer free. He returns to the doctor every six months to make sure it has not come back.

Today, Jose and his faithful wife, Naida, visit hospitals regularly to pray the Chaplet of Divine Mercy with those suffering from cancer. "Every time we find someone who has cancer, I say, 'I've been through that,'" he said. "We are nothing but an instrument of God."

Mercy over grief
Another story testifying to the relentless mercy of God came from Mabeline Burgos of Holyoke, Massachusetts.

Mabeline had an abortion when she was in her 20s. She said that on her way to have her abortion, she was stopped in her car by police three times, all for different reasons. At the time, she thought it might be God telling her that she ought not abort her child. "But I was so focused, [I thought], 'I'm going to get it done,'" she said.

After taking the pill that would induce her abortion, she viewed an ultrasound of her child, seeing an image of the fetus for the first time.

She said, "In my mind and in my heart, something was telling me, 'Look at what you did to me.' That voice ... I was heartbroken. I said, 'I wish I would have seen you first.'"

But it was too late. She had aborted her child.

In her 30s, she converted to Catholicism. After her baptism, she knew she was forgiven by God. But she had not yet learned to forgive herself for her abortion.

One time in prayer, though, the Lord spoke to her heart, convincing her to speak about her regretful abortion at a women's retreat.

After sharing her story for the first time publically, she broke down in tears and told the Lord in prayer, "I want to see the baby. Please tell me what [gender] it was. Let me hear [my baby]!"

Soon thereafter, she went to sleep on a Sunday night and woke up with a start at 3 a.m. to a voice speaking to her heart saying, "Mommy, mommy."

"And God said to me 'That was your son.' So right then and there, I knew that it was a boy. So He gave me that mercy of knowing [what gender] it was. I [had] felt that I was not worthy of being a mom to the child I didn't give birth to, but he said 'You are worthy of that and more,'" she said.

The Lord healed her grief and she hopes that by sharing her experience, she can help others heal, too.

Mercy over grief and illness

Vivian Mestey of Manhatten, New York, considered herself just a "regular Catholic" when her story began. She went to Mass and Confession, brought her children up in the faith, but admits to never having had a personal relationship with God.

"Life changes you," she said.

"We had, at the same time, three family members with cancer," she said. "When you have suffering in life, it's your choice. You have two paths. Either you become bitter, upset, and mad at God, because we're human and we get that feeling, or you take the path to serve God and learn of His mercy, and that He is a good God."

In 2011, her daughter succumbed to breast cancer, leaving behind an 8-year-old son, Christopher.

Vivian, though, after years of battling her illness, survived and ultimately thrived. "I kept asking God, 'Why me? Why? I am nobody.' But he had a perfect plan," she said. "When we think we have control in life, you don't control anything at all. He has it all."

Amidst battling her own illness, and while enduring the grief of losing her beloved daughter, Vivian drew closer and closer to God.

Then she received an extraordinary calling.

"I remember at home cleaning the house and I was sweeping and I started talking in tongues, but I didn't know [at first] that it was tongues. I thought, 'Am I crazy? Why am I saying these words? It started little by little."

One day, a friend asked Vivian to pray over her son, who was born with cerebral palsy. Doctors said that he would never walk, see, or talk.

"When I was praying, I started burning up. I thought it was my chemotherapy," she said. Vivian now realizes that this warm sensation indicates healing. "Today, he's nine years old, totally healed and perfect. So that started everything and it just kept going and going and going."

She also grew in her devotion to the Blessed Mother and discerned that Our Lady of Guadalupe was calling her to be a guardian of her image. She said, "My life is totally different. I live for our Blessed Mother."

For the past several years, she's been ministering her special gift of healing to the sick through the Blessed Virgin Mary's intercession. She travels with a 6-by-4-foot copy of the original image of Our Lady of Guadalupe.

Today, at Encuentro Latino, she allowed hundreds of pilgrims to venerate the image and touch a prayer cloth to it. She said that through these cloths, hundreds, if not thousands, have reported miraculous healings.

"One thing that I say that is really important is, I'm nobody. Everything is for the glory of God. [It's] the intercession of our Blessed Mother. I'm just a humble instrument ... I still can't believe what I do or what he has chosen me to do. I am very humbled because who am I? I'm not different from anybody. I'm nobody. I couldn't save my daughter. It's not from me, it comes from God. So it's all His will."