His Heart Beats for Divine Mercy 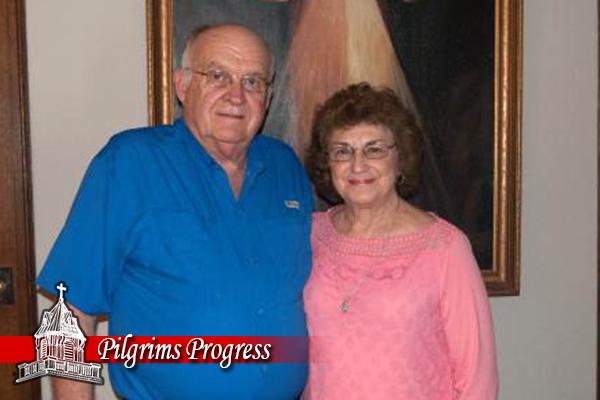 By Marc Massery (Jun 2, 2018)
Charles Yezak Sr. did not begin to grasp the depth of God's Divine Mercy until his heart almost stopped beating.

Charles and his wife, Nellie, hail from Marlin, Texas. These cradle Catholics initially met as children when they made their First Holy Communion together. They reconnected in high school and are now approaching their 52nd year of marriage.

Nellie had always been a fervent Catholic. But Charles, for many years, stressed by the need to provide for his wife and three children, did not make prayer a priority.

"I was teaching. I had a farm. I had a feed store," he said. "A lot of that was to barely keep ourselves above water because in the 1980s, that's when we had a recession. And then in the 1990s, things were real rough. So, I didn't really spend that much time in prayer and being devout. ... I was just busy keeping everything going, but then when the kids left home we were by ourselves."

Thankfully, their son, Charles Jr., in his adult life, introduced them to the message of Divine Mercy. Just in time, too, because in 2007, disaster struck the Yezaks.

"I had a severe heart attack, and then I had five bypasses," Charles said. "When I was in that ambulance, driving away, I was praying the Divine Mercy [Chaplet]. ... Then, afterwards, I was in recuperation and [St. Faustina's] Diary came in. I was laying up recuperating, and I started reading.

"When I was reading it, I was hearing the words of a girl that wasn't educated. To me, that was so important that Jesus picks people that are not educated just like he did [to St. Bernadette] at Lourdes, [France]. He picked a girl that didn't even know what the word 'Immaculate Conception' meant ... [similar to] the three children at Fatima.

"Saint Faustina was so calm about everything, even though she was picked on. She was bullied. So, when I read through [the Diary, I could see this girl who didn't have [much of] an education, who could barely write ... and take what Jesus said, put it down, and then know how important it was."

Charles believes his Polish heritage also helped him receive the Divine Mercy message with an open heart. "Being Polish, it sticks to you more. When I was reading [the Diary], I could see my mother who only had a sixth-grade education and how she struggled," he said.

His fervor for Divine Mercy inspired Nellie to appreciate St. Faustina, too. She said, "Being a former first-grade teacher for 41 years, I can relate, and I see St. Faustina having a third-grade education, which back then was so limited. Probably letters and sounds of the alphabet, simple words and sentences ... and look at this massive book that she wrote."

According to Charles, the Divine Mercy message allowed Him to meet the person of Jesus. He said, "When I was young, I was shooting for the whole world. I wanted to reach all these goals and do all these things. But then when I had the heart attack, all that didn't matter."

Since they became inspired by Divine Mercy more than a decade ago, Charles and Nellie have handed out about 3,000 Divine Mercy Chaplet pamphlets, 10,000 small Divine Mercy prayer cards, and about 300 larger Divine Mercy images. Unsurprisingly, he stockpiles copies of the Diary to give away, too.

He said, "A lot of times we'll give [Divine Mercy Images] to priests who think it's nothing more than just another devotion. So we give them that and then in time they say 'We've got the image hanging up in the rectory.' And then over time, they [have a conversion of heart]. That's the main goal, to bring more priests in."

Charles estimates that he's spoken to most priests within a 100 mile radius of home, "feeding them little things" about Divine Mercy and directing them to listen to the Divine Mercy chaplet on EWTN, for which he and Nellie also work as media missionaries.

"This is our goal, evangelization ... [through] books, videotapes, pictures, cards," he said.

Since discovering Divine Mercy 10 years ago, Charles and Nellie have already traveled to the National Shrine of The Divine Mercy in Stockbridge, Massachusetts, 10 times. In fact, they volunteered at the information booth this past Divine Mercy Sunday for the second year in a row. On Saturday, June 2, 2018, they came back to the Shrine to attend a picnic put on by the Marian Fathers for all their dedicated volunteers.

"We've done a lot of little things ... in the diocese with pamphlets and images," Charlie said. "You plant a seed, and then you water it. It takes time."