The Best Gift is Faith 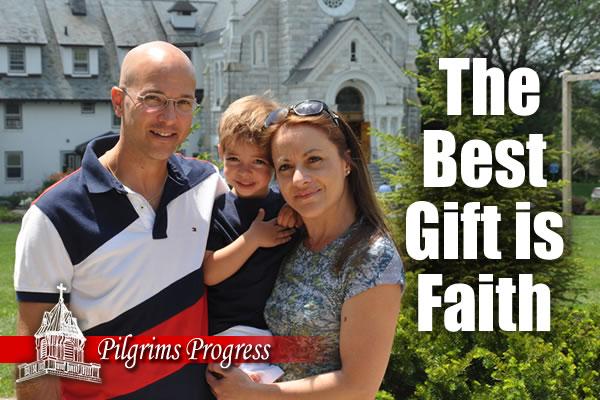 Each year tens of thousands of pilgrims visit the National Shrine of The Divine Mercy on Eden Hill in Stockbridge, Massachusetts. Who are they, and what draws them here? The following is the latest in our "Pilgrims Progress" series. Meet Iliana Schoenbaum:

By Melanie Williams (Sept. 29, 2016)
Iliana del Pilar Santamaria Schoenbaum is originally from Argentina, and she will tell you that with a name like she has, Mother Mary always had a plan for her and her family.

Her father was Spanish, and her mother was Argentinian. They were always active in their parish, and they sent their children to Catholic school. Her parents organized retreats for couples with troubled marriages, gave lectures on Marian devotion, and her mother held a prayer cenacle in their home. As a young girl, Iliana saw priests and nuns coming to her house all of the time. They were all part of the family. Her parents' deep knowledge of Catholic doctrine and unconditional love for God was the example of family life that Iliana had growing up, and that was what she wanted to have for her own family.

Nine years ago, after a six-month English course in Argentina, Iliana used her savings to visit the United States to see colleges and study English. She decided to go to the University of Connecticut. Coming to America was hard for Iliana, spiritually. While most everyone in Argentina is Catholic, in America, to be a Christian can mean that you can be one of many different denominations.

Iliana said, "I realized coming to America that it would be much harder to raise a family in the Catholic faith."

This did not discourage her, though. One year of studying turned into two, then after two and a half years in America, she met a young man named Alex at a gathering of friends. He lived in New York. Iliana lived in Connecticut. For their first date, Iliana drove all the way to New York to meet Alex on his lunch break. For the next two months, they would alternate driving long distances to see each other.

Meanwhile, Iliana's older sister had a baby in Spain and wanted Iliana to be present at the Baptism. Her immigration lawyer told her that her visa could detain her in Spain for up to two years, but not if she was married. Alex told Iliana he would marry her "tomorrow" if she wanted to.

When Iliana's brother moved to Spain, he had left his love behind in Argentina. Iliana did not want to do the same. She knew what she had with Alex, even after just a few months of dating. That night they decided to get married. Within two weeks they were married at Alex's parents' house in a small Christian ceremony.

A few months later, Alex and Iliana went to Spain for the Baptism, and they had a Catholic wedding. Father Mario, a longtime family friend from Argentina, performed the Baptism and officiated the wedding! He had married Iliana's sister and gave the Anointing of the Sick to her father before he passed away a few years earlier. Alex's parents came from the United States, and Iliana's mom came from Argentina. It was a beautiful ceremony. Alex and Iliana were then able to honeymoon in Paris.

For the first two years of their marriage it was as if they were still dating — still getting to know each other. Iliana eventually learned that Alex had a troubled past. Afraid of losing Iliana, Alex at first didn't want her to know that, though he was raised Christian and went to a Christian high school, he did not graduate from that school because he gotten into alcohol.

"I know that God saved him because He knew that Alex was supposed to be with me," she said. "It was hard to not know this until after we were married ... but I knew he was a good man with a good soul."

Iliana and Alex now have a 3-year-old son, Cameron, and they want to raise him in the faith. When coming to a timeshare near Stockbridge, Massachusetts, recently, they wanted to find a place to go to church while on vacation. That's when they happened upon the National Shrine of The Divine Mercy! Now they visit the Shrine often to attend Mass.

Iliana found the Marians' 33 Days to Morning Glory consecration here, which reminded her of the consecration she made to the Blessed Mother as a teenager in Argentina. Then she heard about the 33 Days to Merciful Love consecration and participated in that when it was broadcasted by EWTN during the National Shrine's Divine Mercy Sunday celebration.

"By renewing my Marian consecration and going one step further with the consecration to Merciful Love," Iliana said. "I can feel the love of God working much more deeply in my heart and soul."
The family now visits the Shrine often and always comes to Mass. Iliana loves that she's able to bring Cameron to the Shrine, especially to see the outdoor Stations of the Cross.

"I want Cameron to go through the Passion of Jesus and tell him about the faith, planting a little seed," she said. "That is how I was taught: first, by example."

Alex and Iliana have agreed to never stop being prayerful, trusting in God, and consecrating their lives to Him.

Alex said, "Iliana will tell you that Jesus brought us here, to the Shrine of The Divine Mercy."

Iliana said, "Raising a family today is a little scary, and hard, but Alex and I know that the best gift we can give to our family is faith. That is why we come here to the Shrine, to say, 'Jesus, I am here. I belong to You. You are my Savior. Jesus, I trust in You.'"

Come make a pilgrimage to the National Shrine of The Divine Mercy. Visit our website for more information.