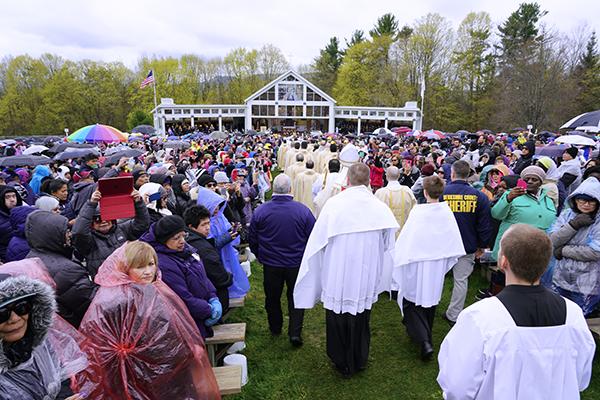 Please see the SPECIAL BANNER on the HOME page to register a group of 20 or more to join us for this special event.

We are receiving a lot of inquiries about the status of our annual celebration of Divine Mercy Sunday, given the spread of the Corona COVID-19 virus.

Below is an article about our celebration last year.

Coming from across the United States and Canada, around 18,000 pilgrims arrived at the National Shrine of The Divine Mercy, provincial headquarters of the Marian Fathers of the Immaculate Conception on Eden Hill in Stockbridge, Massachusetts, to celebrate Divine Mercy Sunday Weekend.

Sunday's outdoor Mass was celebrated by a long-time friend of the Marian Fathers, the Most Rev. Edward B. Scharfenberger, diocesan bishop of Albany, New York. For the 29th year in a row, the Mass was broadcast live from the National Shrine by the EWTN Global Catholic Network. Hosted by the Very Rev. Fr. Joseph Roesch, MIC, vicar general for the Marian Fathers of the Immaculate Conception, and Fr. Chris Alar, MIC, director of the Association of Marian Helpers, the annual broadcast brings the message of Divine Mercy to viewers across the world.

In a sense, said Fr. Chris, "The epicenter of Divine Mercy is right here in Stockbridge."

"The world needs the healing that comes from Christ's Divine Mercy," agreed Fr. Joe. "As Jesus told St. Faustina, 'Mankind will not have peace until it turns with trust to God's mercy' (Diary of Saint Maria Faustina Kowalska, 300)."

That message was amplified throughout the day by a number of outstanding speakers, addressing the massed pilgrims in the morning.

The Very Rev. Fr. Kazimierz Chwalek, MIC, provincial superior of the Marian Fathers in the United States and Argentina, and filmmaker Michael Kondrat spoke about Kondrat's recently released film "Love and Mercy," a docudrama of the life and spirituality of St. Maria Faustina Kowalska (1905-1938). It was St. Faustina who received the private revelations from Jesus that gave rise to the Divine Mercy movement, often called the greatest grassroots movement in the history of the Church. Kondrat shared how his sister's gift of a copy of the Diary of St. Faustina helped him become the faithful Catholic he is, seeking to make films for the greater glory of God and the salvation of souls.

Next, Vicar Provincial Fr. Donald Calloway, MIC, shared a story from his latest book, 10 Wonders of the Rosary and called upon the crowd to take up the Rosary in order to help overcome the confusion of the present age. He also discussed his forthcoming book, Consecration to St. Joseph, and shared that he'd sent a letter to the Holy Father asking for him to declare 2020 a year of St. Joseph. It would be especially fitting, said Fr. Calloway, since 2020 will be the 150th anniversary of Bl. Pope Pius IX's declaration that St. Joseph is the Universal Patron of the Church.

EWTN TV host and author of 52 Weeks with Saint Faustina Donna-Marie Cooper O'Boyle followed next with a powerful call to follow in St. Faustina's footsteps, pursue personal sanctity, and save souls. "We have to reach out with love and mercy to show mercy to the world," said Cooper O'Boyle. "Brothers and sisters, are we doing our bit to spread the message of Divine Mercy?"

Another EWTN TV host and best-selling author Teresa Tomeo closed out the field show with a powerful, four point message:

1. There is no real mercy without truth.
2. Father (God) and Mother (the Catholic Church in her official teachings, as well as the Blessed Virgin Mary) know best.
3. Surrender isn't a four-letter word; surrendering to Christ in His one, holy, catholic, and apostolic Church is the best place for us to be.
4. It's all about what God wants us to do, not what we want to do.

"You should never put God in a box," Tomeo concluded. "Be ready, because the Lord will take you on an amazing ride that you've never expected. Jesus, I trust in You!"

Father Joe also noted, "This year, Divine Mercy Sunday falls on the same date as it did for St. Faustina in 1935, April 28, which was the very first Divine Mercy Sunday. On that day, she wrote this Diary passage: 'Toward the end of the service ... I saw the Lord Jesus as He is represented in the image. ... I heard a voice, This Feast emerged from the very depths of My mercy, and it is confirmed in the vast depths of My tender mercies. Every soul believing and trusting in My mercy will obtain it' (Diary, 420)."

In the course of the Mass, the pilgrims had an opportunity to receive a special blessing from Bishop Scharfenberger, who blessed those gathered with the incorrupt heart of the patron saint of parish priests, St. John Vianney (1786-1859), a French cleric whose incredible miracles, long hours in the confessional, and devotion to the Eucharistic Jesus transformed an area whose faith had been ravaged by the spirit of the age surrounding the French Revolution into an international center of Catholic pilgrimage and prayer. The heart, entrusted to the custody of the Knights of Columbus, has been traveling the U.S. since last November.

Confession and Adoration were available throughout the day, allowing pilgrims an opportunity to entreat God's mercy on themselves and on the whole world. In fact, the day abounded with opportunities for pilgrims to allow the rays of Divine Mercy into their lives and the lives of their loved ones. As Jesus told St. Faustina,

I desire that the Feast of Mercy be a refuge and shelter for all souls, and especially for poor sinners. On that day the very depths of My tender mercy are open. I pour out a whole ocean of graces upon those souls who approach the fount of My mercy. The soul that will go to Confession and receive Holy Communion shall obtain complete forgiveness of sins and punishment. On that day all the divine floodgates through which grace flow are opened. Let no soul fear to draw near to Me, even though its sins be as scarlet (Diary, 699).

Music was provided by the Northeast Catholic College's Polyphony Choir. As well as bringing the incorrupt heart of St. Jean Vianney to Eden Hill for the weekend, the Knights of Columbus helped with crowd control and ushering, and took part in the procession at the Mass. To the side of the main altar hung a prayer banner, consisting of squares of fabric bearing the intentions of Marian Helpers from across the continent.

Joyce and Michael Seno, parishioners at St. Pius X Catholic Church in Selinsgrove, Pennsylvania, came to the National Shrine's Divine Mercy Sunday celebration all for "grace and Divine Mercy and the whole message."

"As much as we're into the message of Divine Mercy, and been coming here since 1999," said Michael, "I can't remember what initially turned us on. I mean, it was the Holy Spirit talking, you know? But it's an awesome message and we come back every year."

This year, their son Brian had come along for the very first time. "I've been threatening to come for a lot of years, and this is the year I came," he laughed.

"The whole experience, everything that's available here from the whole weekend of Confessions, Adoration, the services that they have, the speakers, it's all very inspiring and very fulfilling," Joyce concluded.